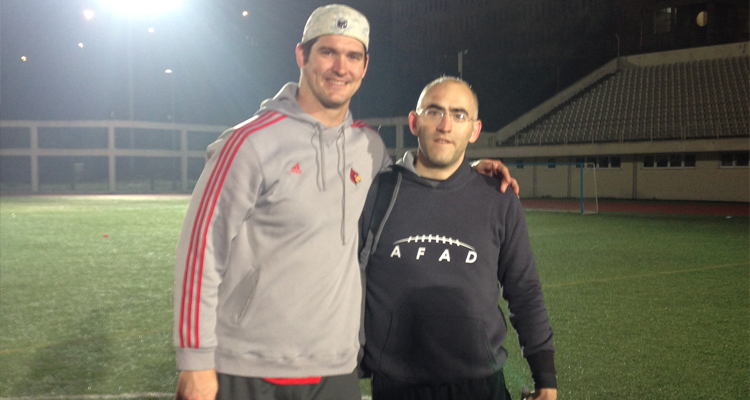 Hilmi Çeltikçioğlu09 Mart 2015
“Call Gary right now!” This was the reaction that Ahmed Awadallah received when he floated the idea of a football camp in his home country Egypt to Breno Giacomini over dinner.

A camp in Egypt itself never materialized to to political conflict in the region, but with the efforts of Gary Barnidge, Ahmed Awadallah and Breno Giacomini, the idea blossomed in to a series of international camps meant to spread football globally.

The first two camps were held in China and Brazil, and this year the destination was Istanbul, Turkey. After coaching and players clinics to help develop the game and press events to spread it, American Football Without Barriers 2015 also held activities with underprivileged children and Special Olympics to address global social responsibilities.

I was able to sit down with Gary Barnidge, one of the three co-founders, after the press conference on March 27th to ask about AFWB.

“Every year we’re looking at growing, going to more places,” Barnidge remarked. China, Brazil and Turkey are as far apart as is geographically possible. AFWB has been to Asia, South America, and Europe. But what about Africa?

“We want to do African countries. The thing is, we have to have somebody that has established a little bit. Because if they have no knowing of it, it’s going to be impossible to grow the sport. China had six, seven teams fully padded. Brazil was more established; they had a lot more teams.”

I asked how Turkey’s current level of establishment tilted the scales. “We do our research. We talked and then we negotiated what we’re going to do and how we want to do everything. We do history on what they do, what they’ve established, how it’s all going; and we knew it was established here. That’s why we were excited about it.”

The 12 NFL players that came to Turkey with AFWB were welcomed with open arms. In the two days of practice held with current Turkish players in the perfect facilities of Istanbul Technical University, players were able to meet, practice, and fanboy with some of their favorite players. Was there any xenophobia from non-football people, particularly about religious issues?

Indeed it is, and since football is such an icon for American culture outside of the States, they made that absolutely clear. Football also has a reputation for being violent, and some players have off-field issues. Does AFWB uphold a principle of bringing players with clean-cut images?

But what about people who don’t have a first chance to begin with? During the press conference, they talked about the possibility of some younger players to be invited to camps in the United States, which might lead to some scholarship offers. Being a co-founder of the Turkish version of a Coaches Association (AFAD), I wanted to know if young coaches in Turkey would have the same opportunity.

“We have not worked on that aspect yet, honestly; we just focus on the kids. But that might be something now that you’ve brought it up. We do this all the time in the NFL. They bring college coaches to come and see how they work. It’s like an internship. I think that’s a great idea. And actually I’m going to bring it up now that you mentioned it.”