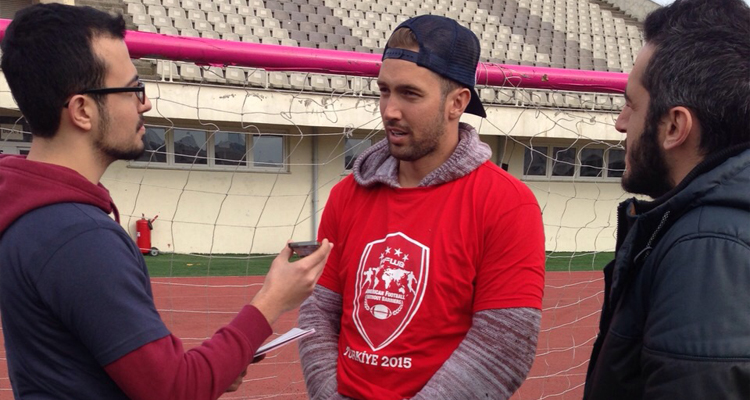 Berk Orkun02 Mart 2015
After our Breno Giacomini of the Jets interview, I finally managed to catch Cleveland Browns’ Pro-Bowler tight end Jordan Cameron with our fellow columnist Gorkem Sahinoglu in order to ask some questions about AFWB, his life as an NFL player and much more. Let’s see what it was like…Röportajın Türkçesini okumak için tıklayınız. (For the Turkish language version please click here.)

Berk Orkun: Firstly we are very happy to have this opportunity to make this interview with you Jordan. The first question is why did you choose Turkey as a destination and what is the main goal of AFWB?

Jordan Cameron: The main thing is, us being over here, our presence for the people of Turkey and Istanbul to show we care and our will to show others how much we love this game, how much it means to us and what we can do for the community. I mean, there is lot of things that football brings to the community. The whole idea of a team working together to accomplish this, you know it spread like a wildfire. The important thing for is we love this game and we want other people to know that how awesome it is.

B.O.: Exactly. You feel the devotion for the game, you love the game and of course you see this game as your lifestyle.

B.O.: So you say that we should reflect these emotions, maybe market these a little bit, to help to growth of the game in our country?

Gorkem Sahinoglu: You guys have been in here three days already. Did you like Istanbul?

Cameron: Loved it! It’s a beautiful city. I love this, you know, history and culture but also there is a lot of modern stuff too. It’s one of a kind; I have never been anywhere even close to it. I loved every second of it.

B.O.: Is thid your first time in here?

B.O.: But that will not be the last time, I think?

Cameron: I want to comeback for sure, I mean this place is awesome.

B.O.: The next question is where do you see AFWB organization in three years… I mean ten years, three years is too short for sure…

Cameron: (Laughs) I feel the AFWB’s goal is to spread awareness about the football across the world, you know, every years is a different country for us, I think they are on their way to do great things. They football, American football to be popular in these countries. We realized that American football is the next big thing in the europe, so wanted it to be bigger. They are organizing games in London now as you know.

Cameron: It’s like that, you know, it is what it is. You have to do it step by step, it’s not going to happen over a night, and I think us being out here is a huge step too. Showing that we care enough to come out here to spread awareness of American football is a very important step in the process.

B.O.: When will we see an NFL game in Istanbul?

Gorkem Sahinoglu: Can I ask some business questions?

G.S.: You will be in the free agency this summer, what’s next for you?

Cameron: Right now I can’t do much. It’s a waiting game. Free agency starts at March 10, so my agent is talking to teams and there is a lot of things going on but much of them are out of my control right now so I got to wait until March 10. We will see what happens.

G.S.: There is a lot of interest for you, I guess?

Cameron: Yeah, I hope so. (Laughs)

B.O.: Last year you played terrific. That was a great ball game. We all enjoyed watching you. To be honest, we are not really big Browns fans, actually I’m a Redskins fan…

B.O.: But of course we want to see you in replacement of Niles Paul actually… 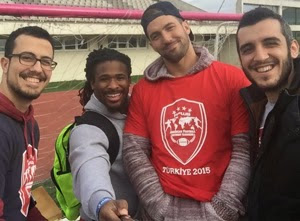 B.O.: Okay. So, you are a Pro-Bowl tight end now, in your progression what was the role of your coach Mike Pettine?[Meanwhile, DeAngelo Williams shows up with his famous selfie stick and takes some selfies!]

Cameron: Of course, head coach is the leader. I mean, he sets the tone for the things, he is a great coach. I like Mike Pettine, I think he is the guy for the job and I think he has taken the grounds for the right direction, especially for the future.

B.O.: Glad to hear that. The next question is about the NFL’s policies. What do you think about the NFL’s “conqoussion” (There was a funny pronunciation mistake:)) policy?

B.O.: Oh, is that the right pronunciation? Sorry for that…

Cameron: It’s okay you are doing great. I mean they are looking out for the players and the protocol, you know, you have to follow the steps, players’ safety is more important than the other things. Now they are making rules, like head to head contact is not allowed. One of those things that made them decide like this is guys are bigger, faster, stronger right now so you know you have to find a way to protect the players. Protocol is, it is what it is so you got to respect that. I think it’s a benefit to the players.

B.O.: Exactly. We are watching a game that depends more and more every year on passing game. You agree with that?

Cameron: Yeah, I mean, the quarterbacks in the league are unbelievable right now. They are playing in a high level, now playbooks, screens and defenses are a lot more complex so now the passing game is like the thing people want to see. At the end of the day, the ones that paying the bills are our fans.

B.O.: You made great point for me actually. Do you think that QB salaries are way too much exaggerated? Or do they deserve it?

Cameron: Yeah, the lead ones deserve it. I mean, guys like Tom Brady, Peyton Manning. They are bringing a lot of money to their franchises and without them they would not be who they are, I mean you got to pay them. (Laughs)

G.S.: What about the quarterbacks that you played with?

Cameron: Which one? I played with a lot them! (Laughs)

B.O.: Especially if you are playing for the Browns!

G.S.: Let’s ask it in this way then: Manziel or Hoyer?

Cameron: They are both great guys. Johnny is young, I think he has got time to develop and I hope he does. Brian Hoyer is a veteran obviously, I do not know where he will be next year but I hope the best for him.

B.O.: What do you think about him? Is he a reason to comeback for you?

Cameron: I don’t know. I did not watched a tape about him or tried to know him well but obviously he has been a leader for a long time and he is a veteran, I think he will do a good job whether he is the starter or he is mentoring to someone, he will do a great job.

B.O.: Definitely. Let’s talk about some sides of your personal life. Not too deep, of course…

B.O.: Who has been a role model throughout your life?

Cameron: My family, my father, my mother. I mean I’m very close with all of them. Grew up watching dad working hard and hailed his work ethic. I think without him I would not have been myself.

B.O.: That is great. So here comes a tough question. Who is the greatest NFL player ever and why?

Cameron: Ever and why? Wow, that is a one tough question. I don’t know there is lot of guys and they all have been great so that is a tough one to answer.

G.S.: Do you have a role model for your position?

B.O.: I will let him know about this! (Laughs) OK we do not want to hold you for much longer, camp is ongoing so that will be the last question. What is the worst part of being a NFL player?

Cameron: The worst part? I think being away from the family is the worst part. I mean, it’s kind of a lonely thing. You are young and you are taken away from your family. You work 7 AM to 7 PM, there is not much time to go out you know. It’s not as glamorous as it seems. But I can’t deny that NFL is giving so much for me and my family and I think it’s a great thing.

B.O.: That is great too. We are glad for this conversation, that’s been truly great so let’s take some photos together and end this interview…