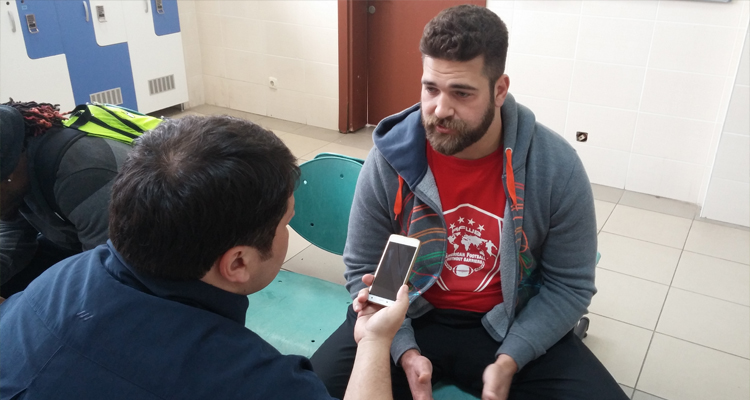 Oktay Çavuş05 Mart 2015
Erik Lorig -fullback/tight end for the New Orleans- interview shall be a cornerstone for every young athlete, who plays football. His dedication and contribution to the programs and organizations is just amazing. Being a versatile, multi-positional athlete, he was asked to play on both sides of the football, either on the L.O.S., or the backfield, due to his size, speed, explosiveness and catching ability. He’s a true, solid football player and his dedication to this great game of football and his team is way beyond his ego. The fate he has for himself, his coaches and his team is just inspirational. Every young athlete has to re-read this article at least a couple of times a year.Röportajın Türkçesini okumak için tıklayınız. (For the Turkish language version please click here.)

Oktay Cavus: Erik, how did you get into the AFWB program?

Erik Lorig: A couple of guys who co-found the AFWB were friends of mine, that I knew just from football. And they, you know I’d heard of them, kind of watch them the last two years. I kind a see them growing. So, I got in touch with Gary Barnidge, one of the founders, maybe a month, two months ago. And I said “Hey, if there was an extra spot, or if someone cancels the last minute I’d be really interested to go on to the trip, work the camps and you know spread the football to whatever country you guys are going onto next.” It just worked out and I got on the trip, sort of last minute and now I’m in Turkey.

O.C.: And thanks for being in Turkey. It’s a great thing, what you’re doing over here. What are your impressions about the football program in Turkey?

Lorig: I was very impressed and surprised. I didn’t have much expectation coming in, because I just didn’t know too much. But, since being here and working with a lot of the Turkish kids, I’d been very impressed. Because, you know, this is, I was aware of football in Europe, or Western Europe, but I wasn’t aware that it was still moving this far, south. And it has. And I was really impressed with actually the kids, who really seem to take the football like seriously. And as I’ve learned more about the Turkish culture, you know the football and the Turkish culture seem to go hand in hand, you know. A lot of honor and toughness and character. I just noticed through the kids how much they take it seriously.

O.C: As a role model, to get our readers know you better; being a two way player and a versatile athlete, how did your positional shifts from DE to TE/FB affect your play?

Lorig: It was good. I happened to play two positions in college, my first two years in college at Stanford University. The first two years I was at TE and FB. I did a little of both. And in my second two years we got a new coaching staff and I happened to be a dual recruit out of High School. Teams that I could play either defense or offense. I just did both of it at high school and I had a big body. So when they got to, one of the new coaching staff at Stanford, they came to me and asked if I would switch back to defense, or switch to defense to be defensive end. They needed help there. And I said sure. You know at that time that’s where they wanted me, so that’s where I want. So I spent the two years being defensive end. I got good. And then I got drafted by the Tampa Bay Buccaneers. And when I was there, they had, even before they drafted me initially to play at special teams and also defensive end and I think they also had in their minds that I play offense, potentially. So, I got there. Started to make myself known as special teams player. They pretty much put me back on offense and starting working again, it all came back very quickly. So, the transition actually wasn’t so bad. It was actually pretty easy. Because I had so much offensive experience in the past and once the transition happened, I just took advantage of it and started to work on the craft every day and I’m still playing football. (Laughs) 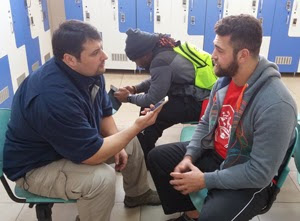 Kaan Ozaydin: So, what about the New Orleans Saints, are we going to see you guys in playoffs next season? Because, you kind of missed it in a very close race, you know, last season.

O.C.: Do you think that the Bounty Gate hurt the defensive unit of the Saints organization?

K.O.: Are you guys still talking about it in the locker room?

O.C.: To take your opinion as a special teams specialist – on Green Bay’s tremendous loss to the Seahawks, on the Conference Championships – do you think the tight end Brandon Bostick was the scapegoat, for that loss?

Lorig: No. I mean it’s always the football. The game of football, it’s always coming down to many plays. It, it rarely comes down to a single play and I think it’s always a collective effort. The way you got to look at it is, it is, well, you know maybe someone could have done something else. I mean, you know, it is constantly balanced out by other plays. And I, I’ve watched Bostick on film. He is a very good player, for a young guy. I’ve watched him. He’s good. I think it is just a situation where, you know, team effort, and you know… That kind of thing…

O.C.: And what you think about the evolution of the NFL football, regarding of the positions you play? Running games are not as popular, as they used to be. Many teams play with different formations where there is a restricted, if any role for the TE and, or the FB?

Lorig: I think you are right. You guys are right. They’ll continue to evolve football, you know, if you’ve watched it in… Follow football for a long time, especially in the NFL, where you know, football’s, you know, the most concentrated, I mean the amount of talent and everything that is changing… Football is constatntly changing and evolving. And that goes with the positions, too. You can see that reflected in contracts. You can see that reflected in the running game, or the FBs. You always see different trends, you know. The Spread offense is quite popular right now, you know, Chip Kelly. And you’ll see that just will continue to change. Maybe that, maybe that might not be popular in five years. Maybe, they’ll go back to more traditional, classical run style, which some teams still do now. You know, the power, weak side, iso… You just don’t know. But, I think, the one thing that is true is the football is constantly evolving. Every year it changes.

O.C.: Yeah, but isn’t it a back breaker, when a Punter makes more money than a Fullback? (Laughs)

Lorig: Yes. Yes, it is. (Laughs) Sadly, the economics of the game sometimes, you know, out way the… Amount of times you hear that (Laughs)