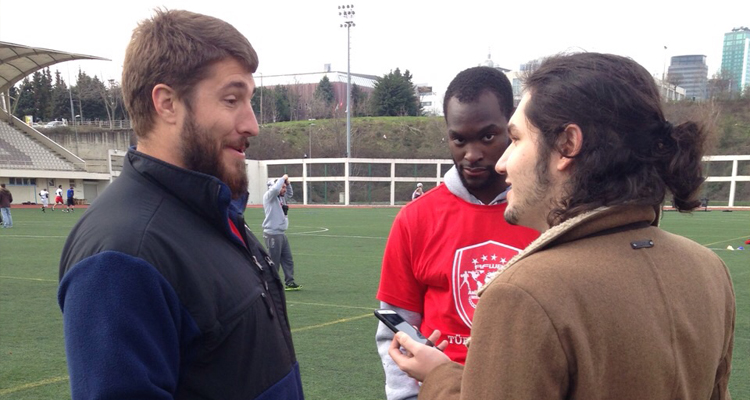 Kaan Özaydın02 Mart 2015
February 27, 2014 was one of the most important days in the history of Turkish football. American Football Without Barriers, a football related charity organization, founded by Breno Giacomini, Gray Barnidge and Ahmed Awadallah, came to Turkey in order to help the development of Turkish football and to help underprivileged kids. They also brought fellow star players such as DeAngelo Williams, Alex Mack, Marhshawn Lynch and among others. During the first day of the events, after the coaches clinic, one of our columnist was able to conduct an interview with New York Jets’ lineman Breno Giacomini and on the second day, I got the opportunity to make an interview with one of the best centers in the league, Alex Mack.
Röportajın Türkçesini okumak için tıklayınız. (For the Turkish language version please click here.)
Alex Mack was so kind to answer every single question, starting from his injury to his contract and even to up-to-date developments in the Cleveland Browns organization. Before we starting off with the interview I congratulated him for the signing of Josh McCown. Actually, the veteran quarterback was signed like just ten hours ago and the news was quite fresh. Alex told me that he got the news from me. Then his teammate, Barkevious Mingo came and confirmed the news and it was a dream coming true kind a situation for me. As Turkish NFL fan and sportswriter, I had never thought that one day I would become the first one to tell a famous NFL center, who was going to be his next quarterback. I was quite honored and felt for a while like an NFL insider. I just want to thank Alex Mack, for his time and for this sincere interview. Hope you will enjoy it as well.

Kaan Ozaydin: Alex, you are in Turkey for three days right now. Do you like it here?

Alex Mack: I am having a really good time. It is really fun. These events are really cool because you get a lot of one on one interaction with a lot of Turkish people. Particularly when you travel you see the side and that’s about it. So I have so much one on one kind of an interaction with the guys, it really makes the trip special.

K.O.: Are you planning to come back?

Mack: Actually it is my second time in Turkey.

Mack: Four or five years ago I went to Istanbul and Selcuk.

K.O.: As a holiday or as a charity event? Because I know that you are involved with social responsibility with the military…

Mack: Yes but as a holiday…

K.O.: So what about your last season? You got injured and broke your leg. I mean you never missed a game in your life before.

Mack: Yeah, it was a different experience. I broke my fibula. I kind a finished the season in sideline, just kind a sit there on the sideline. Obviously it happened. You know its playing dangerous kind a violent sport and these things happen. It is a good learning opportunity for me, really don’t take for granted the chances you have to play this game.

K.O.: You guys (Cleveland Browns) were in the playoff race for nearly the whole season but when you got injured the whole ground attack of the Browns kind a collapsed. What did you think regarding your impact on this?

Mack: I mean I would obliviously like to be a part of it. I want to be on the field, I want to help my team and it hurts when anyone who ever goes down. Typically when you are running the ball well teams will focus more energy to stopping them so I think towards later on the season teams kind a committed to stop the run which just makes tough to run the ball. So its kind a give and take you would see in any season.

K.O.: What do you think about your young running backs, West and Crowell?

Mack: I think that they have a lot of high potential. They really flashed some amazing things, did a really good job. I think, just like our whole team, there is some learning that needs to happen and we just need to get better every day.

K.O.: Cleveland Browns are kind a famous with their quarterback situation for a decade right now and you are a center, you just snapped the ball to too many quarterbacks during your days at Cleveland Browns. Do you remember all of those names? This season on NFL Network, they just asked this question to Larry Fitzgerald; to count his quarterbacks. What about you, can you count them?

Mack: On the spot?! I probably get kind a close. We had a lot, you know that happens, couple of injuries, turnovers… It is going to happen. Especially it is though, you know they have had some troubles in your quarterback position. It is really, really though. So they are eager to try a lot of people. 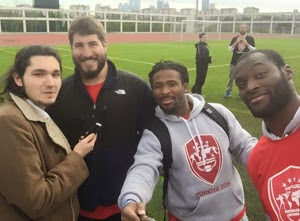 K.O.: And you have just heard the news regarding Josh McCown. What do you think about him?

Mack: I really don’t know a lot. You were the person who told me about it… Good news, I am happy our team is kind a doing some movements in the free agency, I hope he chose up the best and have really good time.

Mack: You wanna take a selfie?

[DeAngelo Williams comes up here and takes a selfie with us, smile :)…]

K.O.: So one last question, it is about your contract. You are one of the top paid centers in the league and you were in the last season going to Jacksonville Jaguars. There were rumors saying that you just wanted to get out of Cleveland and sign for the Jaguars. What do you want to say about this?

Mack: Typically, it was a business decision. You only have so long to play this game. So, this is my chance to play football so I was looking for to make a good contract. Now I have that with Cleveland and I am very happy now.

K.O.: You accepted their (Jaguars) offer. How did you feel when they tagged you?

K.O.: So right now, are you 100 percent healthy? Are you going to bounce back this season?

Mack: I should be back but we are still doing rehab. We are taking it slow. We’re moving around well.

K.O.: Are we going to see the Browns in the playoff race again this season? Because you are in one of the toughest divisions in the NFL…

Mack: We have a very though division and it makes it very competitive. You know we are a really good division. I think we a have good team, we have the pieces to make it happen.

K.O.: They say that, the Browns are thinking about drafting Marcus Mariota. As a center, how do you think about Mariota?

Mack: I think there are some good quarterbacks in this draft… I think after signing McCown, I think it is probably less likely that we draft a quarterback but really we can do anything. We can draft a quarterback, we trade them… The whole world is open for our GM. As a player, I generally do not focus too much on the draft.

K.O.: What do you think about Johnny (Manziel) and Josh Gordon? How do you consider their future as a Browns player?

Mack: Interesting questions, I think Johnny is very secure, you know he is going through his troubles. I think he is in the right place now.

K.O.: Regarding the rehab?

Mack: Regarding the rehab, yeah.

K.O.: What about Josh? He was one of the top receivers in the league just two years ago but he had lots of off the field problems. I mean, I know that I have just asked a kind of an intense question but if you want, you can just don’t answer…

Mack: You know, Josh is going to probably fight that suspension. We wish him the best for that because we want him on the field, he is a good player.

K.O.: OK, thanks a lot man, appreciated. It was so nice to meet you.