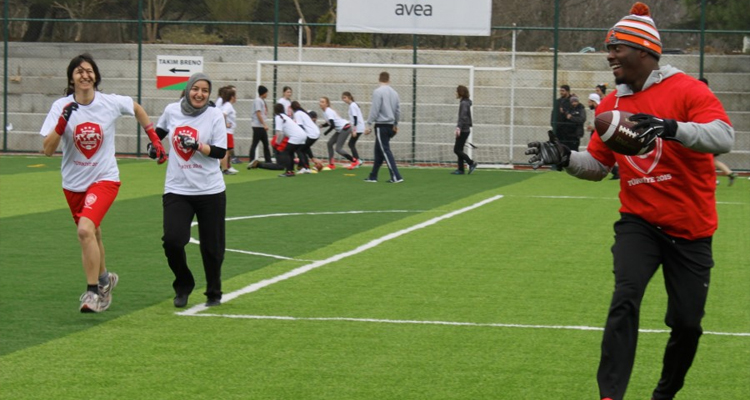 Oktay Çavuş03 Mart 2015
One of the players who came to Istanbul with AFWB Clinic was Johnson Bademosi of the Cleveland Browns. He opened up about the competitiveness in the NFL, how a young athlete should take care of himself and be mentally and physically dedicated, just to play football. He is a great athlete and person. It was a pure pleasure to have him in our hometown and watching him share his experience with young Turkish athletes. This interview will take you to the first days you’ve started to play or watch football, so pure, just for fun. It was an honor to get to know Bademosi, for us. Just wanted to share the same privilidge with our readers…

Röportajın Türkçesini okumak için tıklayınız. (For the Turkish language version please click here.)
Kaan Ozaydin: Johnson, how did you get involved with the AFWB event?

Johnson Bademosi: I got involved with this event thru one of my teammate, Gary Barnidge. Him and Breno Giacomini, they started this a couple of years ago, started out of a conversation. Then they brought on DeAngelo Williams and Thomas Keiser. And it’s all about spreading football. Spreading football to other countries. Because, football has been such a, you know, it has such an impact in our lives and we hope to do that with kids. You know, in our country and abroad, as well.

K.O.: What are your future plans with the AFWB event?

K.O.: What are your impressions about the Turkish players?

Bademosi: I think there’s definitely some talent out there. I think there’s definitely some guys that can play, you know Division II, Division III football, on the College Level, in the United States. And they have a lot of the fundamentals, basics of football. But, I think you guys just need to get quality coaches. Not that you don’t have any, but the best instruction for football is in the United States. And so, it’s understandable that, in a country that’s far from the United States you are not where you need to be. Not necessarily where you need to be, but I don’t know, that’s what we’re trying to do basically… Basically, bring Coaching here and spread football.

K.O.: Would you like to come back to Turkey again?

Oktay Cavus: As a role model for players all around the world, what would you recommend to young players for their off the field development, strength-speed-and-health wise?

Bademosi: Oh, as far as training… Yeah, just train hard. I’ve always done that. Even now, I think about “How can I train?”, “What do I have to do?”… Just, whatever you are doing, just do it hard, you know. And there’s your conditioning, or your strength, that, you know. This game is, you can not play this game at the best level, if you are not in best of shape. And you can be in the best of shape even by you playing the other sports, you playing soccer, you playing basketball, you playing volleyball. Even doing things like that helps you, helps your athleticism, in football. So, I just encourage people to go out there and be active. Weather it’s going to swim, or going to play soccer, or going to do push-ups and sit-ups and lift weights. Whatever you’re doing will help you.

K.O.: Many young athletes dream about playing football in the NFL one day. As an undrafted free agent, was it hard for you to make a name in the NFL?

Bademosi: It was very hard for me. Because, when you are undrafted, your likelihood of making the team isn’t as big as a guy who’s drafted. So, you really have to be willing to almost anything, in order to make the team. And I was willing to do that. I was willing to do the dirty work and go and make a tough block, or go and, you know, run into the wedge during the kick-off… And you know, that’s kind of how I’ve made a name for myself, or trying to make a name for myself.

K.O.: So, what are you carrier plans for your future in the NFL?

K.O: So, what you think about Joe Haden? You think he’s one of the best corners’ in the game?

Bademosi: Absolutely, absolutely one of the best.

O.C.: I wonder what slows you down as a team? I mean you’ve made a great start to the season, but catch up in the second last games. What are the barriers, between Browns and the playoffs?

K.O.: But you have a new quarterback. You’ve signed McCown and Cleveland Browns is famous for constant circulation in the quarterback position, for almost 20 years. Are you worried about that?

Bademosi: Yeah, it seams like, um… You know, I can’t really worry about all that. You know, it’s not my job to worry about who our quarterback is. My job is, to do my job.

O.C.: Do you think next year you’ll make the playoffs? Because, this year you were close…

K.O.: And one last question, that I’ve asked Mingo previously and we had some fun. What you think about your teams’ new logo? (Laughs)

Bademosi: It’s brown and orange. (Laughs) It was so, you know that color… It’s Beautiful. That hue of orange is so beautiful. Compared to the last one, the last one was good. But, this one is great. (Laughs)