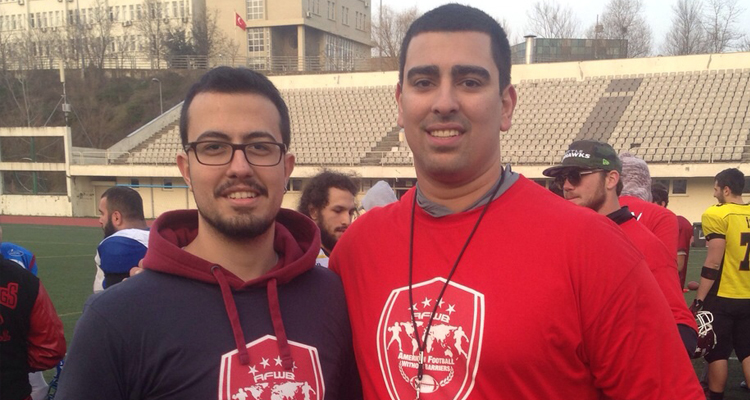 AFWB (American Football Without Borders) has arrived to our country on February, 27. From various teams, 12 NFL players has come to train young players, attend some charity events and mostly spread the awareness about American football to the beautiful city of Istanbul. As NFLTR.com, from the first day of the camp we started chasing grounds for our interviews and the first name that gave us the courtesy of a conversation about NFL, AFWB and American football was Breno Giacomini of the New York Jets. He is one of the three founding members of AFWB so we knew that we were chasing the right guy!

Berk Orkun: Firstly I have to admit that such an important organization like this is kind a source of happiness for us. There is a cumulative interest in American football in Turkey and it seems like it is going to remain in country’s sports life much longer but what we can do to go further?

Breno Giacomini: You have to make them feel special about this. You have to make sure that they are in every aspect of the game. Turkey has a great potential in American football but you must keep working hard. That is what it is.

Giacomini: One of our founders is living in Turkey. That’s the only reason! (Laughs) Just kidding. We wanted to choose a European country and we know that Istanbul is like a bridge from this perspective. We just wanted to see the players and improvement out here and we are very happy with what we saw.

B.O.: Is this your first time in Turkey?

Giacomini: Yes. But I think it will not be the last!

B.O.: Then let’s talk about the current state of the league and you. Now you are playing for the Jets and you have been in this league for five years now. What was the worst thing you had as an NFL Player?

Giacomini: I have been cut from the team the times…

Giacomini: I did not. Because I can’t. That’s the game I love and I want to do this. It is what it is. I mean, if you want that job, you got to fight hard for it.

B.O.: Every person has a unique symbol-role model for their lives. Who is yours?

Giacomini: Michael Jordan, I mean there is no question. We are the children of his era and he effected us much more than you can imagine. Of course I can give a name to you from the NFL legacy, but I think my way is more easier than the other one…

B.O.: Then we got the same answer!

B.O.: As an Offensive Lineman, which part of your job is the most difficult? Pass protection or run blocking?

Giacomini: There is no difference out there for me. I mean if you want to be in this league you have to both of them perfectly. You are playing against the best of the best in NFL. Every single mistake gets punished by a minute. So you must do your part perfectly.

B.O.: So here comes a though question. Who do you think is the greatest NFL player and why?

Giacomini: That is one tough question man. But I think Walter Jones is the right answer for me as an Offensive Lineman. He played for Seahawks and always inspired me.

B.O.: Last question then, what do you think about the NFL’s concussion policy? Is it too harsh?

Giacomini: I think it is all about your technical abilities. If you are a wise man and know how to make a tackle or break it, then you won’t get injured! Coaches always have to make adjustments according to your conditions, of course. So I think that’s not really about the league’s policy, Its a coaching problem.

B.O.: I never looked into that one in this way, actually. Thanks for everything Breno, see you on the field tomorrow!

Giacomini: Thank you, see you later!